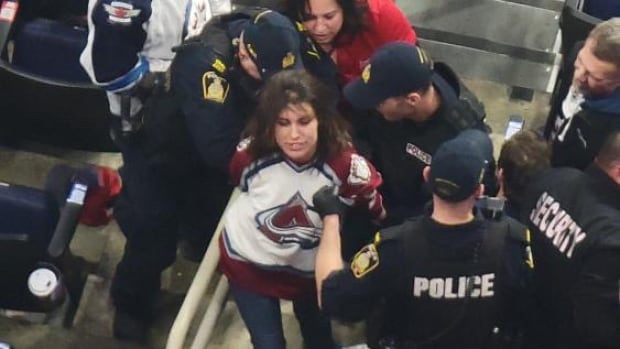 A man and a woman have been arrested for assault at a Winnipeg Jets game Tuesday night, police said, after three other people were injured, including a spectator who tried to help officers. .

Police said Wednesday that a 34-year-old man from Winnipeg and a 28-year-old woman from The Pass face multiple charges.

The events, which occurred around 9 p.m., caused such a stir that Jets and Colorado Avalanche players stood on the ice, watching the fight.

Videos and photos were posted on social media showing the altercation, which police say was likely alcohol-related.

Security personnel at the Canada Live Center, the home rink, were called to a section of the lower bowl of the arena to deal with any disturbances.

Police said in a press release that the man and woman were uncooperative and assaulted security personnel, a 50-year-old woman and a 36-year-old man.

Police say the two men were assaulted and suffered minor injuries to the upper body. They received medical treatment immediately.

During the conflict between security and fighting fans, other people have entered the game to provide assistance. Police say one of them, a 54-year-old man, was assaulted.

He and the 34-year-old lost their balance on the stairs and fell, and the 54-year-old hit his skateboards head-on.

The 34-year-old got up and climbed the stairs, but the other man, who had been decapitated, lay down while the others tended to him.

The 54-year-old man was taken to hospital for treatment.

The police arrived, handcuffed them, and led them outside the stands. As they were being led away, according to the police, the woman spat on one of the officers.

The police officers who stopped her used a spit mask to prevent her from doing it again.

Police say the victims did not know the two arrested individuals, who were dressed in Avalanche gear during a game the team lost 5-0.

Jeremiah Cornelson, who sat in the row behind the aggressive pair, said the incident was chilling and shook him.

“I’ve never seen anything like it at any event, really, in town, whether it’s a bomber game or a concert or something else,” he told CBC Wednesday.

“Obviously, people get drunk all the time, and he usually tells them to leave and they leave. It was so much more than that.”

Those involved should be banned for life from future events and facilities operated by True North Sports and Entertainment — which owns and operates both the Jets and Canada Life Center — the company’s director of communications, Krista Siniski, said in an email.

In the meantime, she added, True North is focusing on working with the police and caring for staff and spectators affected by the fighting.

Rooster Doodle Doo! Baguette is listed as an intangible heritage of humanity by UNESCO

Denis Saadeh, CEO of Betterway: “In order for a citizen to be able to do without a car, he must be reassured by a cohesive multi-modality”