Home sport ‘You talk too much’ – Lionel Messi confronts the ‘disrespectful’ Louis van Gaal and fumes at his Dutch rival after he led Argentina to the World Cup quarter-finals.
sport

‘You talk too much’ – Lionel Messi confronts the ‘disrespectful’ Louis van Gaal and fumes at his Dutch rival after he led Argentina to the World Cup quarter-finals. 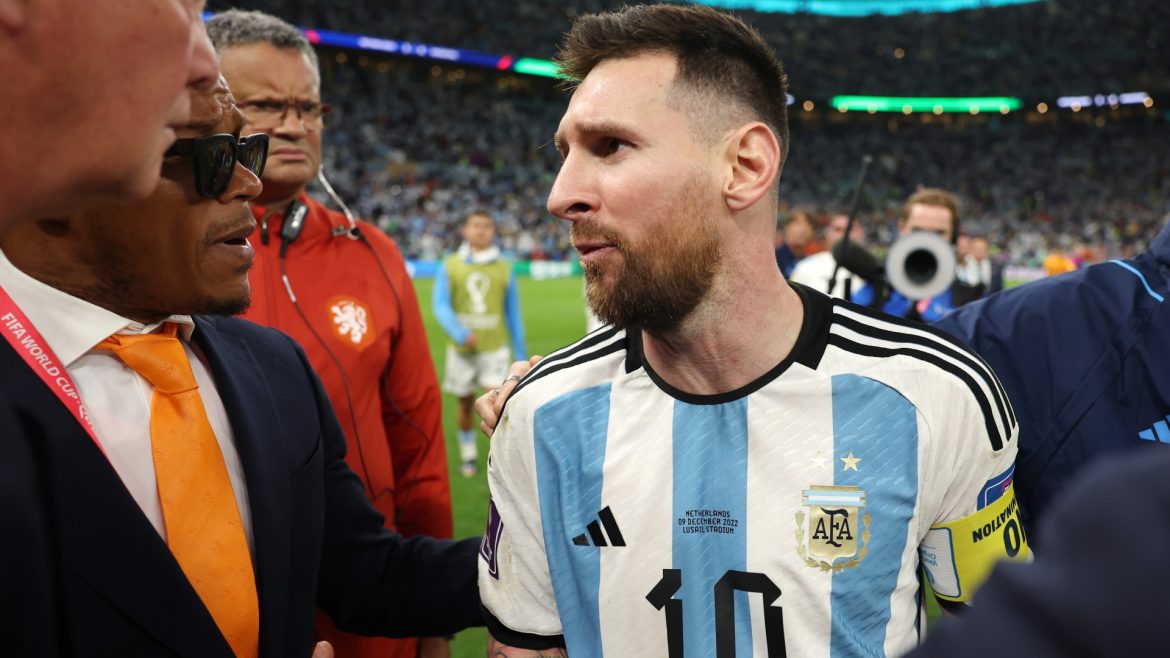 Lionel Messi was excited after leading Argentina through an impressive World Cup quarter-final against the Netherlands.

The Paris Saint-Germain star gave a helping hand to Dutch coach Louis van Gaal, lashing out at the referee and criticizing an opposing player after Argentina won the penalty shootout after a remarkable 2-2 draw in normal time.

There were 18 yellow cards in total – a World Cup record – with Denzel Dumfries being sent off after a penalty shootout by referee Antonio Lahoz, who appeared to have lost control.

Mayhem – whoever has beaten Pele with the most assists in the World Cup knockout stages – was in style the whole time.

After making it 2-0 from the penalty spot with 17 minutes remaining, he celebrated his goal by listening to Dutch coach Van Gaal off the bench.

And after scoring again in the penalty shootout, Then Messi approached the Dutch coaching staff After the match, he seemed to say to Van Gaal and his team: “You talk too much.”

Messi told reporters after the match, “I feel disrespected by Van Gaal after his statements before the match, and some Dutch players talked a lot during the match.”

Messi’s anger didn’t stop there as he also targeted an unknown member of the Dutch squad while giving a post-match interview.

Messi allegedly looked at someone off camera and angrily said, “What are you looking at, you idiot? Come on, get out of there.”

There was a series of hot spots in the game as things got going in the closing stages after Leandro Paredes stole the ball into the Dutch dugout with Virgil van Dijk knocking it to the ground.

Tensions also erupted after the match ended, with Dutch player Dumfries shown a second yellow card while the Argentine players celebrated in front of their opponents.

Messi was among those who complained about the level of management in the match.

He said: I do not want to talk about the ruling because they punish you for your honesty.

“I think people saw what it was like. FIFA cannot use this kind of referee for this type of match.”

Teammate Martínez, who saved two penalties in the shootout, called the ruling “useless”.

“It was a tough match,” Martinez told beIN Sports.

“He gave 10 minutes (extra time) for no reason. He was taking free kicks for them outside the penalty area, like two or three times.

“He just wanted them to score, that’s it. So we hope we don’t have that reference anymore. It’s useless.”

Messi provided an assist for Nahuel Molina’s opening goal before doubling his country’s advantage in the second half, converting it from the penalty spot.

But the Argentine’s hard work quickly faded after the Netherlands sent Burnley Wieghorst off the field, who scored twice as the extra-time equalizer came close to death.

Ultimately, the Silesians prevailed on penalties, with Messi again scoring from the penalty spot and Martínez saving Aston Villa’s goalkeeper from Van Dijk and Stephen Burgess as the Dutch fell 4-3 on penalties against Argentina during the 2014 semi-final rehearsal.

Argentina will meet Croatia in the semi-finals after ousting Brazil earlier on Friday.

The second semi-final draw will be decided on Saturday, with Morocco and Portugal facing off against France and England – Live on talkSPORT.

talkSPORT brings you comprehensive coverage of the FIFA World Cup 2022.

We have broadcast all 64 matches of the tournament live, with over 600 hours of coverage on our network.

You can tune in to TalkSPORT and talkSPORT 2 via the free online streaming service at talkSPORT.com.

TalkSPORT is widely available across the UK on DAB Digital Radio and 1089 or 1053 AM.

You can also download the talkSPORT app file or turn on your own talkSPORT smart speaker.

Scandals at the heart of the European Union | Secrets of the imprisonment of Eva Kylie, Vice-President of Parliament