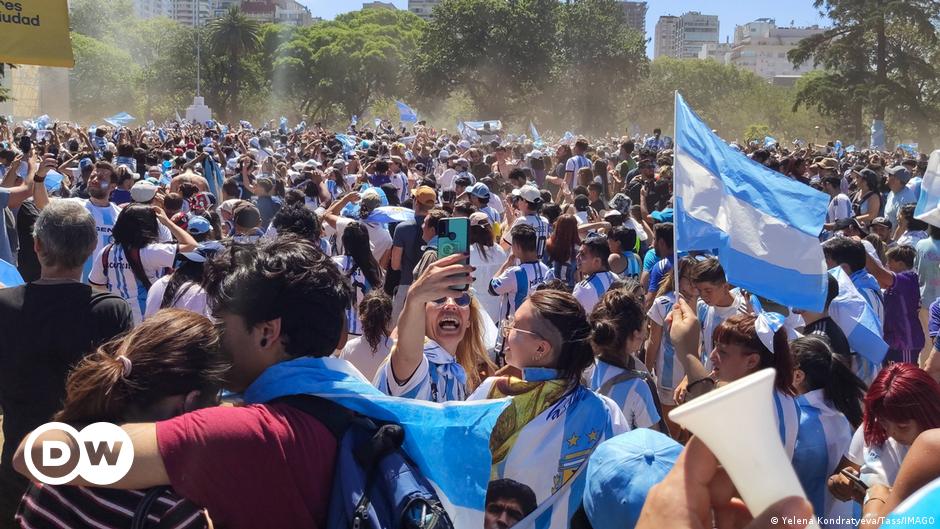 Hundreds of Argentines took to the streets of Buenos Aires on Sunday after Argentina beat France at the FIFA World Cup.

Argentina beat France 4-2 on penalties in a thrilling final that ended 3-3 after extra time.

“It’s a great match, sometimes painful,” said Diego Abergil, 46. “This band made people fall in love with them for the first time in decades.”

From the streets of Buenos Aires, DW Latin America correspondent Nicole Reese described the triumph and celebration as an “emotional earthquake”.

“I see thousands of people celebrating, singing and dancing,” he said as people chanted “Messi” in the street.

“At the beginning of the match, the Argentine fans were very excited,” he said.

The third title was elusive for France

Argentina and paint Lionel Messi dominated most of the Qatar final, with Frenchman Kylian Mbappe scoring twice within two minutes to force the player into extra time. Messi and Mbappe scored again in extra time to lead the final on penalties. Argentina won the penalty shootout (4-2).

“We are especially disappointed because it ended in a penalty shootout,” Lunn, a 14-year-old French fan, told Reuters. “But there were a lot of twists to the game, and we thought it was possible.”

“To come back from two goals down is unbelievable,” Romain Baltazar, another Blues fan, told the agency.

Macron is “very disappointed” with his defeat

French President Emmanuel Macron congratulated Argentina on their victory in the final on Sunday.

“First of all we are very sad and very disappointed,” he told reporters in Qatar.

Macron sought to console Kylian Mbappe and the other French players in the dressing room, telling them “they made us all so proud and made us all tremble with excitement”.

He praised Mbappe’s “extraordinary” performance and noted that he is only 24 years old and already has the rare experience of playing in two World Cup finals.

The French president said that the soldiers will return to France on Monday to perform a parade on the Champs Elysees in Paris.

Macron has been in Qatar since the semi-final match against Morocco.

What did the French players say?

“Of course we are very disappointed, we gave everything we had. We had to face a lot of obstacles during the match and we didn’t give up,” said French defender Raphael Varane.

“For an hour, we weren’t in the game. We could have won. I’m very proud of this team and of being French. We hold our heads high. We came back when it was tough in this game.”

French goalkeeper Hugo Lloris said: “The Argentines got off to a great start, playing aggressively and taking advantage of every aspect of the game. We were a bit behind all evening.”

Six driver changes in France in 2023