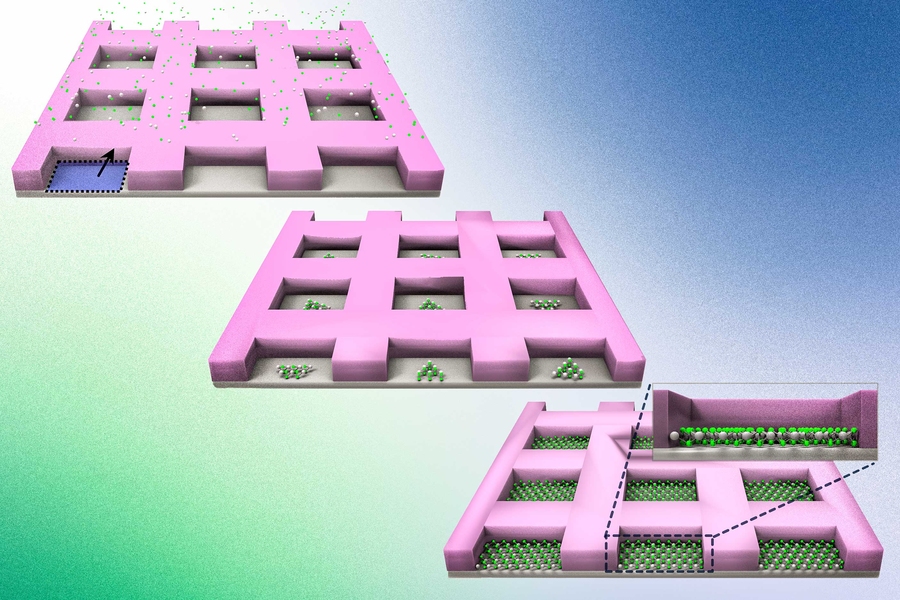 According to Moore’s Law, the number of transistors on a computer chip has doubled every year since the 1960s. But that path should soon level off as silicon – the backbone of modern transistors – loses its electrical properties once the devices made of this material fall below a certain size.

Enter 2D Materials – tiny 2D sheets of perfect crystals as thin as a single atom. At the nanometer scale, 2D materials can conduct electrons much more efficiently than silicon. The search for materials for next-generation transistors has therefore focused on 2D materials as potential successors to silicon.

But before the electronics industry can transition to two-dimensional materials, scientists must first find a way to engineer the material on industry-standard silicon wafers while maintaining its perfect crystalline form. MIT engineers may now have a solution.

By depositing atoms on a wafer covered with a “mask” (top left), MIT engineers can place atoms in the individual pockets of the mask (center), encouraging the atoms to grow into two-dimensional layers and perfect monocrystalline (bottom right).
Credits: Courtesy of the researchers. Published by MIT News.

The team has developed a method that could allow chipmakers to make ever-smaller transistors from two-dimensional materials by growing them on existing wafers of silicon and other materials. The new method is a form of “single crystal axial growth,” which the team first used to grow pure, flawless 2D materials on industrial silicon wafers.

Electrical conductivity is better than silicone

Using their method, the team fabricated a simple working transistor from a type of 2D material called transition metal chalcogen diodes, or TMDs, which are known to conduct electricity better than silicon at scale. nanometric.

Kim and his colleagues detail their method in a paper folder appearing in the wild today. MIT co-authors include Ki Seok Kim, Doyoon Lee, Celesta Chang, Seunghwan Seo, Hyunseok Kim, Jiho Shin, Sangho Lee, Jun Min Suh, and Bo-In Park, plus collaborators from the University of Texas at Dallas , from the University of California at Riverside, Washington University in St. Louis, and institutions across South Korea.

To produce the two-dimensional material, the researchers typically used a manual process in which thin cornflakes are carefully peeled from a bulk material, much like peeling the layers of an onion.

But most bulk materials are polycrystalline, containing multiple crystals growing in random directions. When one crystal meets another, the “grain boundary” acts as an electrical barrier. All electrons passing through a crystal come to an abrupt halt when they encounter a crystal of different orientation, which dampens the conductivity of the material. Even after peeling the two-dimensional wafer, researchers then have to search the wafer for “single crystal” regions – a laborious and time-consuming process that is difficult to apply at an industrial level.

“But no one uses sapphire for memory or logic,” Kim explains. “The entire infrastructure is based on silicon. To process semiconductors, you need to use silicon wafers. »

However, the silicon wafers lack a hexagonal sapphire support scaffold. When researchers attempt to grow 2D materials on silicon, the result is a random jumble of crystals that randomly fuse together, forming numerous grain boundaries that impede conduction.

“It’s considered almost impossible to grow 2D single-crystal materials on silicon,” Kim says. “Now we show you can. And our trick is to prevent the formation of grain boundaries. »

The team’s “single-crystal defocused growth” doesn’t require peeling and probing flakes of a two-dimensional material. Instead, the researchers used traditional vapor deposition methods to pump atoms through a silicon wafer. The atoms eventually settle on the wafer and nucleate, growing in two-dimensional crystal orientations. Left alone, each “nucleus,” or crystal seed, would grow in random directions across the silicon wafer. But Kim and his colleagues found a way to align each growing crystal to create single crystal regions across the entire wafer.

To do this, they first coated a silicon wafer with a “mask” – a layer of silicon dioxide that they etched into tiny pockets, each designed to trap a seed crystal. Through the masked wafer, they then diffused a gaseous stream of atoms that settled into each pocket to form a two-dimensional material – in this case, TMD. The pockets of the mask surrounded the atoms and encouraged them to gather on the silicon wafer in the same orientation as the single crystal.

Making a TMD transistor is simple

“It’s a very shocking result,” Kim said. “You have monocrystalline growth everywhere, even though there is no meta-relationship between the two-dimensional material and the silicon wafer. »

Using their masking method, the team fabricated a simple TMD transistor and showed that its electrical performance was as good as a pure flake of the same material.

They also applied the method to design a multilayer device. After covering a silicone wafer with a patterned mask, they developed one type of 2D material to fill half of each square, then developed a second type of 2D material on top of the first layer to fill the rest of the squares. squares. The result was an extremely thin monolayer-bilayer structure in each square. In the future, Kim says, multiple 2D materials can be developed and assembled in this way to create ultra-thin, flexible and multi-functional films.

“Until now, there was no way to turn 2D materials into a single crystalline form on silicon wafers, and so the whole community is struggling to get next-gen processors without transferring 2D materials” , explains Kim. “Now we have completely solved this problem, in a way that makes devices smaller than a few nanometers. This will change the paradigm of Moore’s Law. »

Caufield will miss the remainder of the season with the Canadiens, and will undergo shoulder surgery