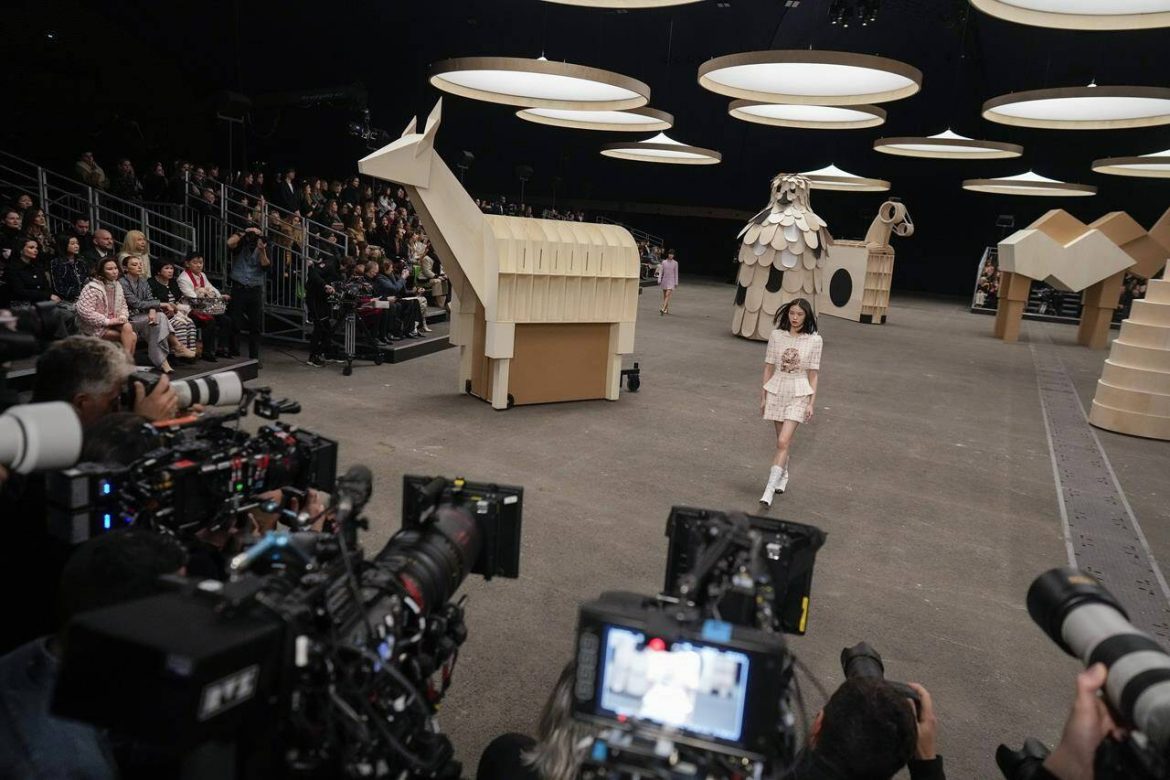 Art returned to the glittering world of Chanel couture on Tuesday with giant animal statues taking over the center of the catwalk like a surreal zoo for the Paris Fashion Week show.

And yet, as much as the animals—made of wood, paper, and uncoated cardboard—appeared simple, lively, and monochromatic, Chanel’s collection contrasted dramatically and resplendently with color and luster in an extraordinarily vibrant display.

Here are some highlights:

Vilehan said he wanted to “evoke the relationship with animals that are constantly changing in our communities.”

The VIP front row of Marion Cotillard, Tilda Swinton, G-Dragon and Vanessa Paradis watched an explosion of massive mobile phones resembling camels, bulls, fishes, horses and lions being transported to this bizarre amphitheater under geometric discs fixed to the ceiling.

A bird with a large beak swooped down and countless rickety wooden poles seemed to give birth to a mannequin in a top hat and a white slit jacket with a fringed skirt. There were guests reaching for their cameras — and one dubbed him “Trojan chick.”

The rest of the group seemed less directly connected to the animal theme — and that level of subtlety wasn’t a bad thing. Dresses with crinkly coats and tweed jackets feature animal motifs – such as the embroidery of Labrador dogs and Scottish Terriers. Elsewhere, there were strong styles of chivalry, building on ideas from Viard’s earlier seasons. Here, a riding jacket was key, layered in shimmering silk tweed over Gamine miniskirts and youth skirts.

There were plenty of quirks in the long white gloves, black and white ties, gold or black tight shoes with white lace that looked like boxers – but they sometimes felt out of place.

Dotted with brocade, metallic foil, sequins, and shimmering silk, the power of this ultra-poetic design speaks for itself.

A loose, amorphous dress shimmering like a silver fish with thousands of sequins embroidered and a bodice of black, white and gold silk. Elsewhere, a thick, woven bell-skirt was created using billowing layers of white silk like an underwater shell, or perhaps a cloud of thin layers.

At the grand stone entrance to the Garde Républicaine, Giorgio Armani’s belated departure forces guests – some scantily clad – to wait in the bitter cold of the evening. Once the green light was given, Michelle Yeoh was among the first to walk the Lantern Romance trail, which makes her “so happy to be here.” Then came Carla Bruni-Sarkozy, praising the “feminist power of haute couture”.

Juliette Binoche was next, dodging questions about Coco Chanel’s role in the upcoming Apple TV series “The New Look” by saying, “It’s not tonight, it’s time to support Giorgio – he’s a huge supporter of artists.”

Once the media circus had subsided, guests were installed on a clown stage lined with emulsions in intricate colours, before joyful décor.

Silk bolero jackets kicked off the ’80s runway, with diamond shapes popping up throughout, first as a 3D relief for the jacket and, more dramatically, later in a mosaic explosion.

Very delicate embroideries of all colors under the sun fall in shades sometimes in the A and column near the body.

But so many styles and shapes are combined in this all-encompassing collection — with oversized bejeweled florals, bedazzled sequined jackets and geometric turtlenecks — that it’s hard to pin down the show as a whole.

At times, the outfits could have benefited from Armani’s focus on structure — like a one-piece dress with crinkly cutouts at the skirt — but there was a lot of glitz and glam that many guests didn’t find.

A mix of fashion design mixed with drama.

Bejeweled flowers adorn this free-flowing hairstyle, as does a fabric drape.

Green dress with a charming hourglass silhouette. She reshaped the model’s body—open at the sides, wider at the top—and held in place by a Grecian strap. Flowing unstructured from its round neck to the floor, the porcelain blue dress is distinguished by its sheer simplicity.

However, not everything was a success, such as the blue hoodie dress with slightly asymmetrical lapels and a misplaced belt that confused the eye.

A movie was shown on a giant screen for Stéphane Rolland’s guests before the show, paying homage to the 1959 film “Black Orpheus”, which was shot in Brazil. The film, which won the Academy Award for Best Foreign Language Film, is set against the backdrop of a favela during the famous Carnival period.

But Roland seemed more concerned with carnivals than with poverty in any favela—and the costume design itself was edgy, cool with a ballroom kick, and, as always, very statuesque.

The black and white dresses were adorned with a giant piece of fabric, one like a floor-scraping train or like a huge choker where the model moved to an open back. The other look, and one of the best of the bunch, was a backless 3D mini dress with a bias-cut skirt. Roll out in a huge, hip wave.

Rolland’s play on dramatic bodywork reveals the purity of often-immaculate lengths of fabric, with V-necklines, slit skirts and cropped shoulders.